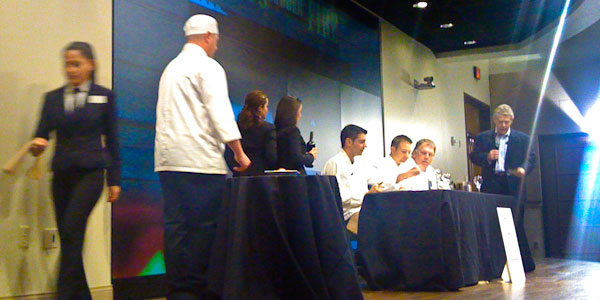 After slugging it out in their own right on Iron Chef, local golden boys bring it home to challenge the huddled masses with the filming of a new show (for the web? CSPAN?, local TV?) called Chefs On Fire. Hosted by Keeper Collection, an online collection of the recipes of our cooking heroes. Chef Kent Rathbun of Abacus and Jasper’s, chef David Bull of The Stoneleigh Hotel (formerly of the Driskill) and chef Tyson Cole of that fish place on South Lamar (kidding) judged a variation of their signature dishes. Three contestants competed for each. This was more fun than I thought it was going to be. Hula dancing ensued, Tyson lost his cherry and child labor laws were broken. I am surprised any of us made it home. Two hundred people in attendance. Collectively, the bail would have been stunning. 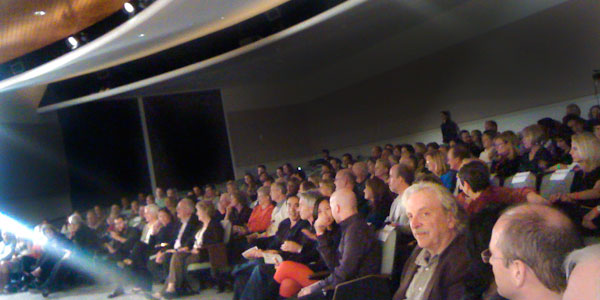 With hot microphones, Eli Olliger (cooking a Cole dish) and Martin Weaver (cooking a Rathbun dish) burned the house down. The new AT&T Conference Center and Hotel hosted the event and I must say, rocked it in their own right. I mean, if someone is in your backyard, you better bring some action yourself. They did. The pre-show eats were some of the best I have had. Coffee rubbed Beef Tenderloin with Candied Garlic and Smoked Maple Syrup. Beef short rib with Pureed Parsnip and Celery.

One reply on “Captured Audience”