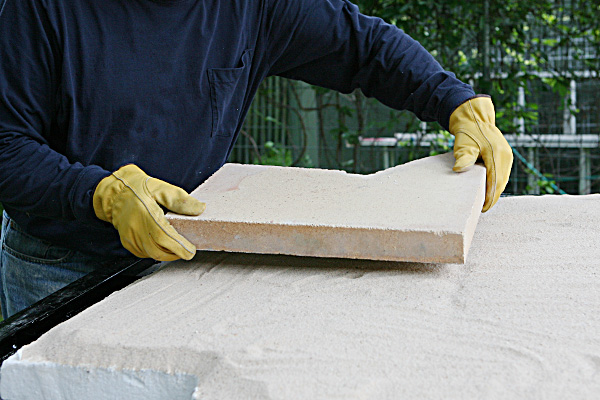 Do you smell that? That’s the smell of wood fired pizza…in two weeks. I know what you are thinking. I should have bought a high-speed wood fired microwave pizza oven. Did I just invent that? Someone get my patent lawyer on the phone. Actually, the construction should go relatively quickly. Most of the two weeks is eaten up by drying the mortar and curing the oven.

You might have noticed that I was not  in the kitchen much the last week. I have a good excuse. I was in my backyard, laying stone. The Forno Bravo oven is taking shape. And, I must say, thanks to them for talking me into the modular kit as opposed to the ‘brick by brick‘ oven. Don’t get me wrong, old school is cool. But, I have a feeling that the ‘two week build’ would have been more like two months.

First down is the insulating fire board. It keeps the oven’s 900 degrees working on the pizza, not slowly raising the temperature of central Austin. Next was the sand to level the hearth stones (what the pies will cook on). Stay tuned…

One reply on “Building A Pizza Oven: Planting the Hearth”